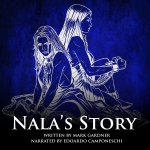 The young woman frowned and turned her head toward the command. She scowled and stared at the old man, his robe barely concealing his enormous pot belly. His face wrinkled and lined, gleamed in the mid-day sun. I hope you die of heat stroke, she thought before gathering herself, disregarding her chains, and replying: “No man has power over me, yī qiào bù tōng.”

Her scowl changed to a smile, and she fluttered her eyelashes as the old man processed her insult and her use of the modern Han Chengyu. His face darkened, and the wrinkles that were so pronounced began to flush a deep crimson, as he translated the words: to lack the most basic knowledge.

Her victory and the accompanying smile were short lived. He gathered the chains binding her wrists and pulled down hard. The force spun her around, and she stumbled backward. The slave-trader grabbed at her, clasping his large hands tight on her arms. She was compelled to stare up, her back arched over his pot belly, the sweat-soaked clothing unwelcome against her bare skin.

He looked into her wide eyes and whispered. “Watch your tone, slave. Or I’ll sell you to the Magistrate at a discount.” His eyes roamed her supine figure, his perpetual frown forming a lecherous leer. “You know what happens to girls joining his harem…”

He let the threat linger, unclarified. She cringed, not at his threat, but at his affront on her olfactory. He stunk with a stench of fermented wine, onions, and urine. The odor was all the more evident as he leaned closer and tugged at her bindings. As the metal dug into her wrists, all she could do was close her eyes and will the cretin to have his fun humiliating her and return her to the line.

Before he could further her humiliation, an ebony hand waved between his roving eyes. “Please, honorable sir, forgive Nala, it won’t happen again.”

The old man looked into Hazina’s face. Her soft features and skin the color of wet river rocks elicited a leer. He spun Nala around, grabbing a handful of her hair in his meaty hand. She saw the gleam in the old man’s eyes. It was a dangerous gleam. A gleam born years of getting what he wanted. When the gleam was aimed at Nala, she did not fear it. He could wear out his eyes, staring at me like that; Nala had told Hazina once, he has no hold over me.

This time, however, the look was aimed at the only thing that made Nala endure his advances: Hazina.

The old man’s eyes flittered back and forth between Hazina in her pastoral dress and Nala in her slightly parted ruqun. He erupted in a spattering of Han dialect, too fast for Nala to comprehend. The tirade ended with him turning his head and spitting into the dirt. He released Nala, and she collapsed to the ground. He glared at Hazina a final time before stalking away.

Off to harass some other girl, Nala thought as she gathered herself up and worked to loosen the chains that bound her to her sister. She pressed her knuckles into her back at the strain the altercation had caused her.

Mark Gardner lives in northern Arizona with his wife, three children and a pair of spoiled dogs. Mark holds a degrees in Computer Systems and Applications and Applied Human Behavior. END_OF_DOCUMENT_TOKEN_TO_BE_REPLACED
This entry was posted on Sunday, March 6th, 2016 at 08:00 and tagged with Nala's Story and posted in Book Stuff, Promos. You can follow any responses to this entry through the RSS 2.0 feed.
« Nala’s Story Audiobook Progress
16Sunsets Promo Interview #4 »