War of the Worlds Updates

By Mark Gardner
One of you wonderful internet denizens emailed to ask for permission to use the cover art designed for the non-English editions of Retaliation in a wikipedia article. I’m cool with that for wikipedia, reviews, interviews, etc. As long as you don’t try to pass off my covers as your own, I’m cool with any of my released covers to be on Wikipedia, etc. In fact, here are some unreleased Retaliation covers for y’all to drool over:

The Afrikaans project (above) was cancelled, and this may or may not be the final cover for the chinese version (below):

I’m hoping to sign the contract soon for a French version, but time will tell.

After talking to some industry professionals, I’ve decided to only actively pursue language contracts for Chinese, Spanish, Portuguese, French, & Italian. Don’t worry if you read in a language not on that list, if someone comes along and offers a contract on another language, I’ll definitely consider it. (I mean, is “no” even in my vocabulary?) 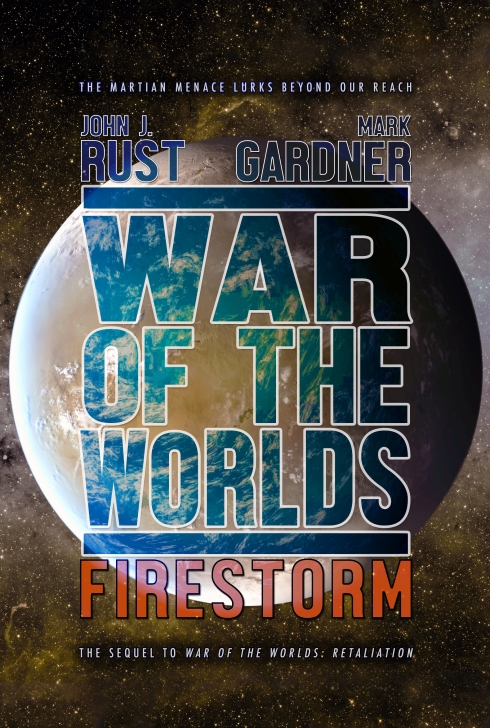 (You wikipedia guys and gals can use this draft version of Firestorm for your article.)

Those of you who are close to John and I know that the biggest delaying factor for War of the Worlds: Firestorm is me. People tell me that I’m a prolific writer, but John can outwrite me 4-to-1. (Autocorrect kept changing that to “outwit.” Maybe my computer knows more than I do…) I emailed the latest vomit draft of my last chapter to John over the weekend, and I’m like 90% certain he’ll respond with three of his own chapters, sticking me with the onus to move the project forward. We’re more than 2/3 finished with the rough draft. It’s gonna be tight to get that done before the end of October, but it’s totally possible. Nonetheless, we’re golden for a presentable draft in November.

Personally, I’d like to see Firestorm release at the same time John and I get a nomination for a Hugo or Nebula, but I think I recall an adage with wishes and horses and beggars and stuff. I ran into Alan Dean Foster at Prescott Comic Con, and he basically dashed my hopes of a Nebula nomination. (He was the president of the Nebula selection committee for a thousand years or something.) Mike Stackpole went poo-poo on my dreams of a Hugo while we were at Phoenix Comicon together. They weren’t being dicks or anything, they just wanted to make sure I had my head on straight and could manage my expectations. I’m still gonna hold on tight to my dream, and maybe something will pop out if I squeeze hard enough.

It’s getting late here in the Copper State, so I’ll head to bed, and post a book review in the morning.

Mark Gardner lives in northern Arizona with his wife, three children and a pair of spoiled dogs. Mark holds a degrees in Computer Systems and Applications and Applied Human Behavior. END_OF_DOCUMENT_TOKEN_TO_BE_REPLACED
This entry was posted on Monday, October 16th, 2017 at 21:00 and tagged with War of the Worlds: Retaliation and posted in Book Stuff. You can follow any responses to this entry through the RSS 2.0 feed.
« Mourning the Trilogy by Adan Ramie (plus a FREE e-book!)
Paradox Bound, by Peter Clines »

3 responses to “War of the Worlds Updates”