Fan Art, or “How I learned that it’s great to be an Author.”

I received this drawing from an eleven-year-old fan today. Damn, it feels good to be an author!

War of the Worlds: Retaliation now on Kindle Scout

Hey, everyone! Wednesdays have been all about Days Until Home for so long, and now that the web serial is finished, and the special edition paperback is out, it’s time to move on from the space disaster.

Wait a minute… We’re still in space… But instead of doing this and that in the near future, we’re in an alternate past. A past where the War of the Worlds happened, and after the Martians died, we humans reverse-engineered their tech to better all of humanity. Well, for the most part. We also have the looming threat of another invasion by those slimy squids from the fourth rock from the sun. We’ve got to take the fight to Mars. End the Martian threat once and for all. After all, it has been twenty-six years since the original attack from the red planet.

War of the Worlds: Retaliation is the vision of my co-author, John Rust. He completed the first draft way back in 2012, but it floated around waiting for the copyright of H.G Wells’ 1898 story to expire in the European Union. I think I harassed John for a number of months in early 2015 to get this story published. We wrapped up the latest revision in December 2015 and started submitting the story to the major and some specialty publishers.

The final attempt to wrangle a publishing contract is going to be through Kindle Press via a Kindle Scout campaign. The campaign started in the wee hours this morning and will run for thirty days. After that campaign, Kindle Press offers a fifteen-day decision period. Since the stipulations of the campaign dictate that only one author is considered, John has authorized me to act as the sole author for the purposes of the KS campaign. I’m a tiny bit uncomfortable with this since John has had the lion’s share of the writing, rewrites, and general writer angst, but apparently, I’m higher profile. (Go figure!)

Anyone with an Amazon account can nominate War of the Worlds: Retaliation for consideration by Kindle Press, and I hope that you will nominate our story. Also, since getting the word out is of major importance, please reblog, retweet, and do whatever it is that you do on Facebook. The more exposure we can get, the better chance we have of receiving a contract. As a bonus, if War of the Worlds: Retaliation is selected by Kindle Press, anyone who nominated it will receive a free digital copy when it releases. Hopefully that will be the first week of January 2017.

So, please spread the word and nominate War of the Worlds: Retaliation on Kindle Scout today:

Terminator meets Snow White in a steampunk adventure through time.

“This story happened when His Majesty was still a young man, a huntsman to be precise. It is the tale of a clockwork machine from the future, with a mission to terminate His Majesty to prevent him from meeting his future queen.” Jarvis paused for effect. “Then, she was known only as Snow White.” 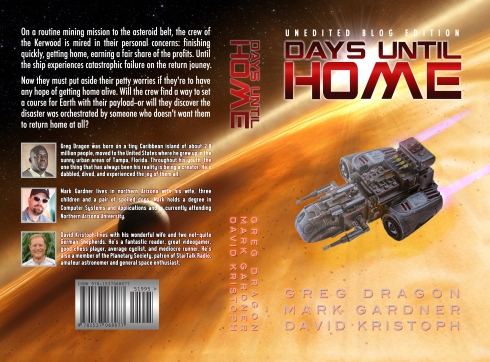 Hey Days Until Home fans! For those of you who would like a dead tree version of the web serial, head over here:
http://daysuntilhome.article94.com
If you use the following code: E4EUKEVT we’ll knock the price down to our cost ($6.95.) We’re working on getting this ready for a proper release in 2017. When that happens, this special edition will no longer be available.

By Mark Gardner
Hey, Sixteen Sunsets and Moonrise fans! Here is a high-resolution image of the beautiful Joel Cotejar art for Moonrise. The title and frame are removed so you can get your art on. Click on it to embiggen.

END_OF_DOCUMENT_TOKEN_TO_BE_REPLACED

Moonrise to 16Sunsets or Vice Versa

I reblogged Cindy’s post, and then decided to copy and paste it. Stolen from the Wonky Pen:

If you haven’t already noticed there are two chapters to something called Moonrise shared on the blog, and it’s not just a random reblog, it’s an ongoing web series about superheroes that I am a part of. Hoorah! I am not procrastinating as much-ish. And besides superheroes are trendy now.

I am not very good at these types of blog posts but here we go. The hook.

Moonrise plays as a sequel to a novel called Sixteen Sunsets (you may have seen it as 16Sunsets) which is written by a long-distance friend and amazing prolific writer Mark Gardner of Article94 (seriously he has no stopping and the energy of a YouTuber). I highly recommend you go and read that first, because Spoilers (nailed that Doctor Who reference). It’s a great rollercoaster with many fresh faces, superpowers and lots of secrets regarding them. You can buy it from these places or have an unedited, somewhat hectic read, plus lots of cool extra stuff like interviews, hints and book covers here.

If you have already read or followed the progress of Sixteen Sunsets from web series on the blog to the novel that it is now, bravo to you! All the more – if you liked it and if you’re incredibly curious what happens next to the main characters come read Moonrise.

It’s going to be a handful – it’s going to be action packed, there’ll be intrigues, hacking, secrets of historical proportions, mass manipulation, a ton of people emerging with various, crazy superpowers, and add to that a creepy, overpowered little girl.

If you are a fan of those sorts of things, welcome to Moonrise!

It’s an incredible fun to write and continue in the spirit and charm that Sixteen Sunsets put forth and I’m honored and flattered that Mark thought of me when he was planning on Moonrise.

Follow his blog or watch this space because I will be reblogging all of the chapters regardless. Chapters will be posted every week on Monday on Mark’s website. You can get the news first by following Mark’s Twitter @Article_94 . He has a ton of brilliant ongoing projects and I’m sure that if you’re not into superheroes you can stay busy and entertained with any of his other works, some of which he is co-authoring with as many as 3 other writers. You can check the sci-fi, horror, slice of life, steampunk, historical, fantasy projects here.

Thank you for reading and I hope I’ll see you in Moonrise!

END_OF_DOCUMENT_TOKEN_TO_BE_REPLACED

I’ve already posted this first chapter of Nala’s Story when Edo and I were working on it. The audiobook is now available at Amazon, Audible and iTunes. If you want Nala’s Story for free, and you don’t have an Audible account, then sign up for the free trial. They pay me a bounty when someone does the free trial, and one of my audiobooks is the first one “purchased.”

If you’re into audiobooks, be sure to check out Body Rentals and Forlorn Hope.