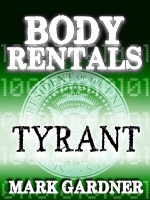 Adan Ramie’s word-a-week prompt wraps up this Body Rentals prologue. I worked in both the word and the photo she posted. These 684 words bring the total of the Tyrant up to 3,088.

John waved to the gathered faithful and smiled to boisterous cheers. He had done it; he had successfully stolen the presidency of the United States. He made appropriate dismissals of staff members and appointed enough to keep up the appearance of cleaning house and set into the motions of being president.

Several months after the inauguration, Teresa attended a private dinner with former president John Michaels. She was writing a story about what retired presidents did with their time. It was a puff piece, and she knew it, but John made sure she was at the top of the list of press invitees, and he was happy to have her around.

“Tim’s gonna be so upset that he didn’t get invited to shoot some video.”

John chuckled, “You and Tim can be there for my next great adventure, whatever President Hudson wants me to do.”

Something clicked in the back of Teresa’s mind. She viewed the whirlwind campaign with a detached perspective that she was unable to do when she was close to the story. It was the diaspora of a dandelion – each seed fluttering in the wind was a piece of the puzzle. She excused herself and went into the hall to make a phone call.

Her call was answered on the second ring; her brother was nothing if not predictable. “Tim,” she whispered after he got his greeting out of the way.

“Do you have any video of any of the candidates together or with President Michaels?”

“I can look, but other than election night, nothing comes to mind.”

“Right,” she hissed, her voice getting louder with excitement. “There weren’t any Vice presidential candidate debates, either! Something doesn’t add up!”

She couldn’t have known John was listening at the door. She was comfortable with John and in her excitement made a rookie mistake: Talking about a sensitive story where others could hear her.
END_OF_DOCUMENT_TOKEN_TO_BE_REPLACED

Here’s part three of the Tyrant prologue. The #3WW prompt is hidden in these 874 words. Can you find it?

“I would like to thank presidential candidate Parsons for being with us today, stay tuned for more right after this…”

John stood, shook hands, said a few pleasantries, and was on his way to limo number three. Since Ron Parsons was from the same political party as the sitting president, he only needed to emphasize his willingness to do what was in the best interest of the country and an eagerness to improve the people’s perception of the party and the presidency.

It was all trite and boring, but he had to play the part. He was eager to get back into his own body and a few hours sleep before the farce stared again. He managed to make it to the street entrance of the studio without incident. The long hours were tiring, but after the election, the missed sleep would be worth it.

“Mister Parsons, a word before you head off?” John paused and looked in the direction of the voice. It was coming from an attractive woman, brown hair and eyes, in her early – to mid twenties. John started to smile, but his eyes focused on her press badge. Her cameraman followed behind her and kept the camera pointing toward the ground. It was a maneuver to keep him relaxed, but he knew the press had power.

Normally he wouldn’t have stopped for an unscheduled interview, and he was about to say so when he caught a whiff of her perfume. It wasn’t anything special, some sort of vanilla scent. John’s wife had worn vanilla. His pause was enough to allow her to catch up with him.

“My name is Teresa.” She pronounced it ‘Tur-ESS-a’ with all of the emphasis on the ‘ess.’ “This guy with the camera,” she jerked the hand holding the wireless microphone over her shoulder, “is my brother, Tim.”

John gave her his most practiced politician smile, “I’m pretty busy Teresa.” He handed her a business card. “Call to set up something a little more,” he paused and his eyes roved over her professional pantsuit, “intimate,” he concluded before stepping into the waiting limo. If Teresa responded, he hadn’t heard it.

John continued shuffling interviews, appearances, and speeches with all three bodies. He continued the diatribe playing all three roles: James Hudson as the frustrated outsider demanding change, Ron Parsons as the fast track candidate trying to distance himself from the current administration, and President John Michaels as the incumbent striving to ensure a smooth transition and secretly hoping his party stayed in power.
END_OF_DOCUMENT_TOKEN_TO_BE_REPLACED

This one is for Stephanie’s Inspiration Monday. Here’s the continuation of the Tyrant storyline. 914 more words for you:

John woke up on a gurney. He could smell the sterile environment, and he knew it would take a moment or two to regain control. He sighed. That’s part of the process, the thought wasn’t new. He could hear movement around him, and he knew from countless times before: Eyes closed is always better. When he felt his control return, he turned and saw his body lying on the gurney next to him. Everything was going according to plan. The sights, sounds and feelings were coming into focus. He knew he would be ready to perform his next task within minutes.

John sat up, and Chris came up to his gurney.

“Sir,” he whispered, “shall I get the limo ready?”

John opened his eyes and made a shooing motion with his hands. “Let’s get this thing done.” As he made his way to the limo, he stopped and stared at his still body lying on the gurney. His focus shifted up to a glass observation window above. He could see the brilliant inventor of the swapping technology studying readouts and computer screens. He had never seen Dr. Terrance Mann sleep, but assumed Mann found the time. As long as Dr. Mann was available for the switch, it really didn’t matter to John when the doctor slept. For the amount of cash he’s being paid, John thought as his lips morphed into a smile, Mann can sleep after the election.

The limo drove to a television station with a pundit that openly disliked the President. John knew he would enjoy the interview. Getting through the studio was much easier without the Secret Service tagging along.

Secret Service, he thought. They were all fools. Had he not chosen his own staff, his plan would’ve never worked. For this interview he was the president’s opposition, determined to make sure President John Michael’s cronies didn’t stay in office. The charade would’ve been ineffectual with Secret Service fools lurking about. Donning the microphone and earpiece was different; there seemed to be a slight absence of care than when he was the president.

“Mister Hudson,” the host intoned, “you heard the President’s interview today, would you care to comment or respond?”

“Thank you, I would. The President thinks pleasant words and rhetoric will win this election for his party, but I am here today to tell the American people that we cannot continue with business as usual. Drastic changes need to happen to get this country moving forward again. His administration of corrupt crooks cannot be allowed to continue for four more years.”

“Now hold on there a minute, Mister Hudson.” The host’s voice rose to an effeminate falsetto. “There has been no confirmation of any wrong-doing in the Michaels’ administration.”
END_OF_DOCUMENT_TOKEN_TO_BE_REPLACED

It’s been a while since the Body Rentals universe has seen any action. Chuck’s post over at terribleminds was to generate a random title and write. I finished at 616 words, so enjoy!

“Thank you for appearing on our program Mister President, I know our viewers are very interested in what you have to say.”

“It is my only hope that this transition from my administration to the next will be a smooth one – without partisan politics or infighting.”

“That is a very genial statement, considering your administration will continue business as usual if your party’s candidate is elected. There are many people out there who believe this country will not move forward unless the current administration is removed.”

“I have heard these rumblings as well, and I can only believe in the sacred institution that is the electoral process.

I suspect we will be revisiting these same issues in four or eight years, regardless of the outcome this November.”

“Well I sincerely hope your optimism of a potential changeover translates to those working in your administration.

Anyway, I know your time here is short, and I appreciate you taking the time to visit us in person.”

The president nodded sharply and smiled as the cameraperson indicated they were no longer live. The producer’s aides rushed to assist President Michaels remove his earpiece and microphone.

Secret Service monitored all actions made by these aides, ready to move if there was a threat. No threat was anticipated, but anticipation was what this business was all about.

President John Alexander Michaels turned to his press liaison and raised his eyebrows. “How was that Chris?”

“John, great segment. We will see what news bytes we get from this one.” Chris Farnze had been with John as his press liaison for many years before his presidency, even before John had been Vice President.

John served as President for ten years. He assumed the role of President after his predecessor had a fatal aneurysm at the end of her second year. There had been conspiracy theorists claiming John had been involved with her death, but, after exhaustive investigation, a congressional oversight committee cleared him and his staff of any wrongdoing. There were those in both parties who felt he should not be president, and had moved over the years to thwart his political agenda.

The fact he was affiliated with a different political party than the late president only fueled the rumors and speculation.
END_OF_DOCUMENT_TOKEN_TO_BE_REPLACED